While diesel engines have many advantages, older ones have the disadvantage of emitting significant amounts of toxic particulate matter (PM and PN) and nitrogen oxides (NOx). Health experts have concluded that those pollutants adversely affect human health and contribute to acid rain, ground-level ozone and reduced visibility.

Based on a comparison of vehicles of the early 90s and Euro VI (2013-14) standards, European legislation has led to emissions reductions for heavy-duty engines of more than 90% NOx and PM in less than 25 years. New vehicles complying with recent legislation have thus become clean but the legacy fleet of old, more heavily polluting vehicles still contributes significantly to urban air pollution.

Low and ultra-low emission zones are being progressively implemented in many cities in Europe and these require vehicles to meet a satisfactory level of exhaust emissions before they are allowed to drive inside the zone.

Companies that manufacture emission control devices have responded to the challenge of reducing pollutants from diesel engines already on the market. Through their efforts, and those of AECC members who supply key system components, cost-effective retrofit technologies have been developed to reduce harmful emissions of existing heavy-duty vehicles and non-road mobile machinery, often to the standards required of new vehicles.

A UNECE regulation No 132 is in existence and covers retrofit emissions control (REC) systems’ performance, design and installation for heavy-duty vehicles and non-road machines.

What are the options for retrofitting diesel vehicles?

As an industry association that strives to foster state-of-the-art emissions control technology, AECC believes that certain technical and certification procedural elements need to be carefully considered to ensure any retrofit/upgrade programme for older cars and light commercial vehicles will truly deliver benefits to urban air quality.

Technical elements to consider are packaging and controls, definition of pollutant reduction targets and durability, all in cooperation with the original vehicle manufacturer.

When considering certification elements, an appropriate regulatory framework and type-approval procedures are required.

AECC issued a position paper on the matter of retrofit for light-duty applications; you can find it here. 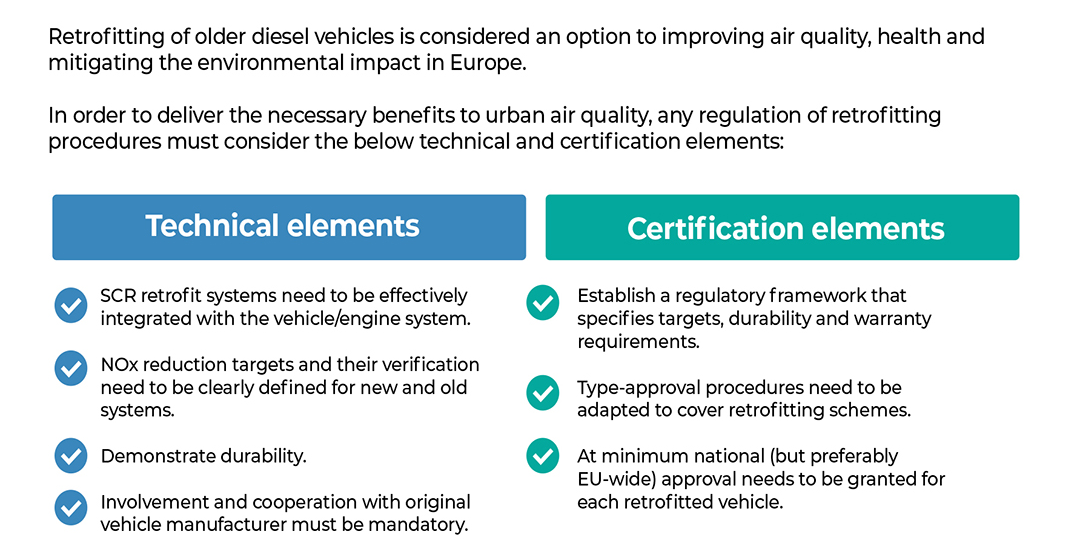