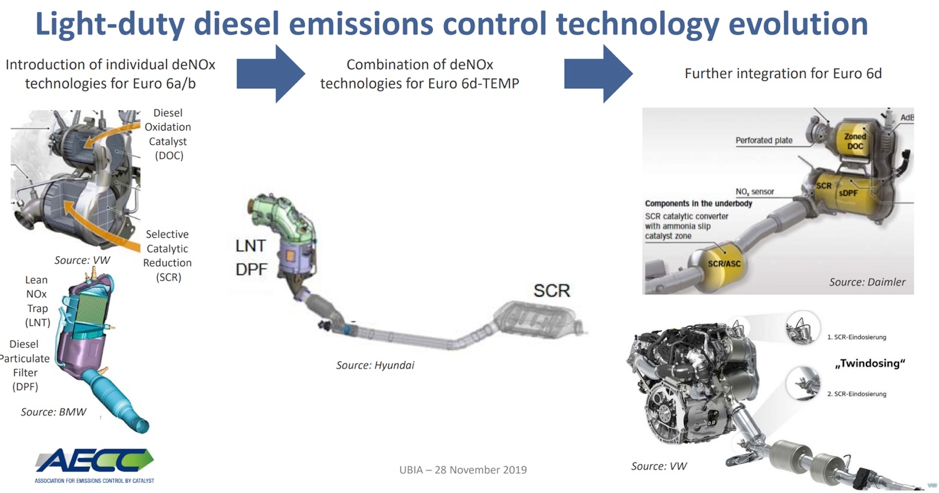 Diesel engines for European light-duty vehicles normally use a diesel oxidation catalyst (DOC) to treat the emissions of carbon monoxide (CO) and unburned hydrocarbons (HC). This is similar to a three-way catalyst but does not need an oxygen sensor as it does not use a ‘closed loop’ control. Particulate emissions, in mass (PM) and number (PN) can be controlled by a wall-flow Diesel Particulate Filter (DPF). These have been fitted to all new cars and vans in Europe since the implementation of the light-duty Euro 5b emissions legislation in 2011 which effectively forces their use on all diesel vehicles.

Control of diesel NOx emissions was largely handled through engine measures until Euro 5. The main technique used to meet Euro 5 limits was to recirculate a small part of the exhaust gas into the inlet air so as to reduce the oxygen content and combustion temperature. This in turn lowers the amount of atmospheric nitrogen that is converted to NOx. NOx emissions limits for Euro 6 light-duty diesel engines are less stringent than those for gasoline-engine vehicles, although at Euro 6d-TEMP and Euro 6d stages, actual emissions from most diesel vehicles do meet the gasoline limits by using advanced emission control technologies.

Development of new diesel electrified vehicles strives toward a combined CO2 and NOx reduction through an integrated design of the entire propulsion system, consisting of the combustion engine, the emissions control system and, increasingly, 48-V electrified components. The sophisticated design and well balanced interaction between these components lead to improved propulsion efficiencies and lowest CO2, CO, HC, NOx emissions and particulate emissions on the road.

AECC has recently completed a vehicle demonstration project with the aim of enhancing the overall robustness of the NOx emission control, while maintaining CO2, across a wider range of operating conditions compared to current prescribed Euro 6 Real Driving Emission boundaries. To achieve the objective, a combination of NOx emission control technologies was implemented in an integrated approach on a mild-hybrid diesel passenger car. All details and available material can be found here.

European emissions limits for light-duty vehicles (up to 3.5 tonnes and carrying up to nine people including the driver) – in other words cars, ‘people carriers’, SUVs and light vans – first reached a level that forced the use of catalysts for gasoline engines in 1993. At that time it was still possible to use oxidation catalysts and so-called “open-loop three way catalyst (TWC)” for some vehicles, but the increasingly stringent stages of emissions regulation since then (Euro 2 in 1997, Euro 3 in 2001, Euro 4 in 2006, Euro 5 in 2009 and Euro 6 in 2014) have ensured that three-way catalysts are universally used for gasoline engines in Europe.

Typical modern systems for vehicles with gasoline or gas engines will include one or more ‘close-coupled’ catalysts near to the exhaust manifold and often an additional catalyst further down the exhaust, under the floor of the car. The exhaust system will include an oxygen sensor or air:fuel ratio sensor that monitors the oxygen content of the exhaust and continuously adjusts the fuelling to match the conditions. This also ensures that the system alternates rapidly between very slightly fuel-lean and very slightly fuel-rich conditions. In this way both the oxidation functions (conversion of CO and HC into CO2 and water) and the chemical reduction function (NOx into nitrogen) can operate simultaneously.

The Euro 6 legislation introduced a particle number limit for Direct Injection gasoline vehicles (both stoichiometric and lean-burn engines). After a temporary relaxed limit, the final Euro 6c/d-TEMP requirement entered into force in September 2017 and aligns with the diesel limit for particle number. It requires the use of Gasoline Particle Filters (GPFs), especially to ensure particulate emissions are controlled under real-world operation of the vehicles. The GPF substrate could be used as the carrier for the three-way catalyst converting the harmful gaseous pollutants. 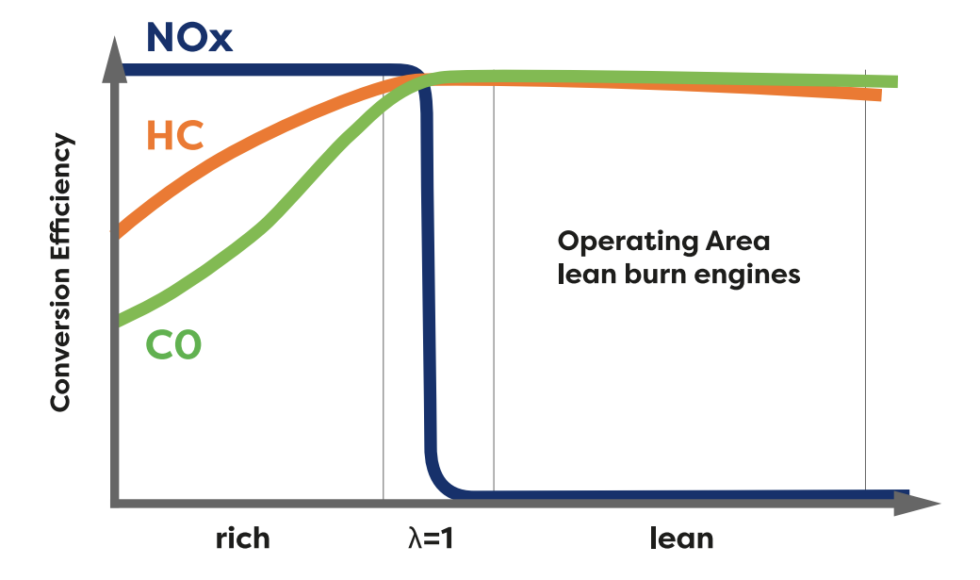 In parallel, lean-burn Direct Injection gasoline (GDI) engines can operate in stoichiometric (i.e. λ = 1) conditions where a three-way catalyst can be used in some circumstances but in other conditions they operate in lean conditions. Here the exhaust oxygen content is more like the oxygen excess of diesel exhaust and so the three-way catalyst cannot reduce the nitrogen oxides to harmless nitrogen. To control NOx emissions these engines also use a Lean De-NOx catalyst. The adsorber is regenerated from time to time by switching to rich operation for a few seconds so that reductants are produced. 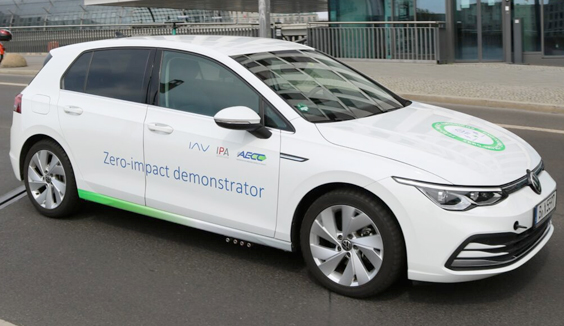