Oxidation catalysts are the original type of catalysts and were used from the mid-1970s for gasoline cars until ultimately replaced by three-way catalysts. They look much the same as three-way catalysts and their construction and composition is similar but slightly less complex. Oxidation catalysts convert carbon monoxide (CO) and hydrocarbons (HC) to carbon dioxide (CO2) and water but have little effect on nitrogen oxides (NOx). They are now rarely used on gasoline cars in Europe because of the advantages of three-way catalysts, but they are still used in some parts of the world where emissions legislation is less stringent. They may also be used on some buses running on Compressed Natural gas (CNG), motorcycles and for applications such as small gasoline engines for hand-held equipment such as strimmers.

Three-Way Catalysts (TWC) are the main technology used to control emissions from positive ignition engines, for example: gasoline, natural gas and Liquified Petroleum Gas (LPG)) engines. The catalyst uses a ceramic or metallic substrate with an active coating incorporating alumina, ceria and other oxides and combinations of the precious metals – platinum, palladium and rhodium. Three-way catalysts operate in a closed-loop system including a lambda or oxygen sensor to regulate the air-to-fuel ratio on gasoline engines. The catalyst can then simultaneously oxidise carbon monoxide and hydrocarbons to carbon dioxide and water, while reducing NOx to nitrogen.

The catalyst light-off is the minimum temperature necessary to initiate the catalytic reaction, Fast light-off catalysts allow the catalytic converter to work sooner by decreasing the exhaust temperature required for operation. Untreated exhaust emitted at the start of the legislated emissions test and on short journeys in the real world is then curtailed. Changes to position of the catalyst closer to the engine, the thermal capacity of substrates and type and composition of the active precious metal catalyst have together resulted in big improvements of total tailpipe emissions.

More thermally durable catalysts with increased stability at high temperature allow the catalytic converter to be mounted closer to the engine and increase the life of the catalyst, particularly during demanding driving conditions. Precious metal catalysts with stabilised crystallites and washcoat materials that maintain high surface area at temperatures around 1000°C are needed. Improved oxygen storage components stabilise the surface area of the washcoat, maximise the air-to-fuel ‘window’ for three-way operation and help the oxygen sensors to indicate the ‘health’ of the catalyst for On-Board Diagnostics (OBD) systems.

Diesel engines and lean-burn direct injection gasoline engines offer the benefit of lower carbon dioxide emissions and reduced fuel consumption. The conventional three-way catalyst technology used on gasoline engines needs a ‘richer’ environment with less oxygen in the exhaust than is available on these engines to be able to reduce NOx, so new approaches are required.

Selective Catalytic Reduction (SCR) was originally introduced on stationary power plants and stationary engines and then large engines such as those on ships. It is now fitted to all new heavy-duty truck, bus and non-road diesel engines in Europe, as well as diesel passenger cars and light commercial vehicles.

The efficiency of SCR for NOx reduction also offers a benefit for fuel consumption.  It allows diesel engine developers to take advantage of the trade-off between NOx, PM and fuel consumption and calibrate the engine in a lower area of fuel consumption than if they had to reduce NOx by engine measures alone.  Particulate emissions are also lowered, and SCR catalytic converters can be used alone or in combination with a particulate filter.

In the SCR system, ammonia is used as a selective reductant, in the presence of excess oxygen, to convert up to 99% of NO and NO2 to nitrogen over a special catalyst system. Different precursors of ammonia can be used; the most common option is a solution of 32.5% urea in water (e.g. AdBlue®) carefully metered from a separate tank and sprayed into the exhaust system where it hydrolyses into ammonia ahead of the SCR catalyst.

With the introduction of the Real-Driving Emissions (RDE) legislation, SCR technology is used to control NOx emissions for diesel passenger cars and light commercial vehicles. A compromise has to be found by the vehicle manufacturer between the size of the urea tank and the refill intervals. 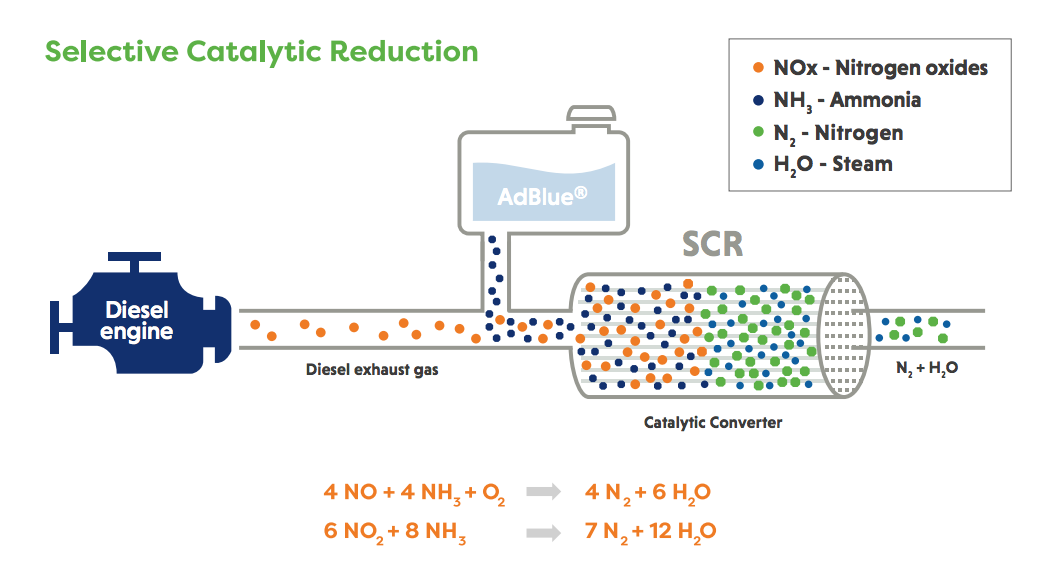 Optimised systems incorporating these new technologies are in production. The use of catalytic converters close to the exhaust manifold (close-coupled position) reduces the time to light-off in the cold start and, therefore, the total emissions. Light-off times have been reduced from as long as one to two minutes to a few seconds. Improved substrate technology, combined with highly thermally stable catalysts and oxygen storage components, allows the close-coupled catalyst approach to meet the Euro 6 standards as well as the California Low Emission Vehicle (LEV), Ultra Low Emission Vehicle (ULEV) and Super Ultra Low Emission Vehicle (SULEV) regulations.

Electrically heated catalyst systems use a small catalyst ahead of the main catalyst in order to maximise emission reductions in cold applications. The substrate, onto which the catalyst is deposited, is made from metal so that, when an electric current is passed, it will heat up quickly. This brings the catalyst to its full operating temperature in a few seconds.

Lean De-NOx Catalysts, also known as hydrocarbon-SCR systems use advanced structural properties in the catalytic coating to create a rich ‘microclimate’ where hydrocarbons from the exhaust can reduce the nitrogen oxides (NOx) to nitrogen, while the overall exhaust remains lean.

The hydrocarbon may be that occurring in the exhaust gas (“native”) or may be added to the exhaust gas through injection of a small amount of additional fuel. This has the advantage that no additional reductant source (urea) needs to be carried but these systems do not, at present, offer the same performance as ammonia-SCR systems